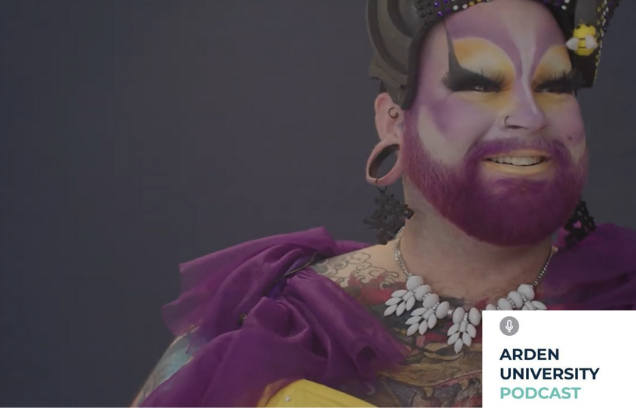 Welcome to our latest episode of the Arden University podcast.

A celebration of all things LGBTQ+, Pride Month 2022 is taking place in June. This year’s event holds greater significance than usual, as it marks the 50th anniversary of the UK’s first Pride march – where people from the LGBTQ+ community marched to Trafalgar Square to make their voices heard and demand equality.

Recording a special podcast to celebrate Pride 2022, we spoke to our senior lecturer in healthcare, Phil (dressed head-to-toe in fabulous drag!), about how they’ll be marking Pride 2022, how to be a positive ally to the LGBTQ+ community, what the UK’s drag scene is like, and lots more.

Watch the video here, or read some highlights from our chat with Phil.

Hi Phil, could you introduce yourself to our listeners?

I'm Phil, I identify as non-binary and use they/them pronouns. I'm a senior lecturer in healthcare management, here at Arden. But also, my alter ego is Philli-Mi-Up, and I'm also a drag mess and activist.

Do you want to tell us a little bit about your research area and what you do when you're not being Philli-Mi-Up?

My research is looking at LGBTQ+ and dementia care, particularly gender-neutral care spaces and how identity changes for people when they enter a different social context.

So, for example, an older person at Pride would be a very different person compared to an older person in a heterosexual care home. I'm looking at how we can try to minimise the change of identity and instead allow somebody to stay their authentic self.

June is Pride Month 2022. Is there anything big coming up that you're involved in?

We've got some exciting stuff lined up here at Arden. I do talks, consultancy work and provide help for organisations. I generally go into care homes and speak to them and promote the gay agenda. Hopefully, I'll be speaking to a few, which is quite exciting.

I'll also be talking with a colleague of mine, who is living with dementia and from the LGBTQ+ community. And we're both hopefully going to be touring the UK in drag, giving talks and doing poetry. So, that's going to be fun. It's in the early stages, but fingers crossed!

Here at Arden, I'm running an LGBTQ+ conference, where we've got lots of exciting speakers coming to talk.

How do you feel about going into Pride 2022?

I think Pride 2022 is definitely needed more than ever. I think you quite often hear people say 'well, why do we still need it?'. But I know here in Birmingham recently we've had a spate of hate crimes in our Gay Village - our safe space. People getting bottled on a regular basis. It's quite scary.

I've also been reading some really hateful comments about Jake Daniels, the footballer who recently came out. Then you've got a lot of hate towards the trans community, a lot of issues with certain people on social media, and the Equality and Human Rights Commission putting out transphobic material that goes against the Equality Act. Even people who should be fighting for us are still against us. We, as a community, are having a difficult time at the minute.

How can people who aren't part of the community get involved and be better allies for the LGBTQ+ community?

You can look online - Stonewall's website has what a good ally looks like. It's about making sure that people don't get misgendered. Even if they're not around - challenge it. Promote pronoun use, so if you have email accounts - work or student accounts - include your pronouns in your email signature.

It's just about creating discussions and challenging things you hear. For example, if someone says something's gay to describe it negatively, challenge it - because there's nothing wrong with being gay. A lot of it is about not being performative, so not just having a rainbow flag on your Instagram but then misgendering someone. It's about putting in the hard work to educate yourself on how to do better. 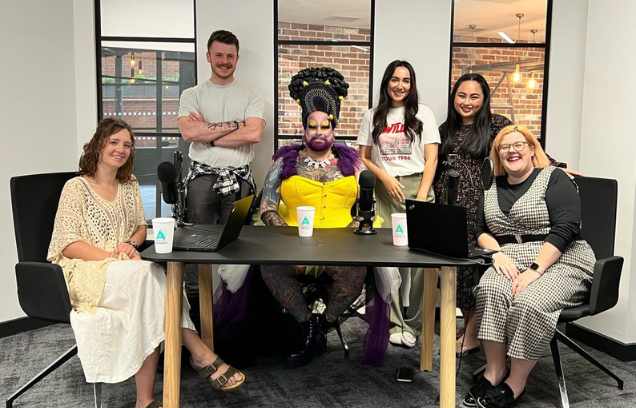 So, in a theoretical scenario where you've got a friend who uses the wrong pronouns for someone, what would be a polite way of correcting them and helping them to understand the reasons behind it?

It's a tricky one. Personally, I use they/them pronouns. Obviously, it's something different from a lot of people's thinking. People are very binary focussed. I generally explain that I use they/them and explain why – that gives a little bit of context. So, I think it's fine to just say you're upset and engage in a discussion.

If you're an LGBTQ+ ally, it's important to explain the importance of pronouns and why they're incredibly personal to people. It's something that needs to be respected. If you explain the impact being misgendered has, people tend to be more accepting of correct pronoun use.

Do you have a 'best' moment of Pride since you decided to come out in drag?

I've got two. I've got a large online drag family. I do a lot of online stuff internationally. And I run my own little drag show where it's like a competition but nobody's judged - because I hate the idea of judging people's art. Everybody takes turns doing a look, then we'll discuss it and have fun. When I ran that, people just said, 'thank you, so much' and were complimentary of my own drag too. I got a lot of validation from that - I could do drag my own way.

The second is when I hosted my first in-person show at Saucy in Worcester. It was the first time I'd been in public in drag and everybody was so welcoming and accepting. That was a lovely feeling, being able to express myself in the way I like to.

It's hard to have the confidence to utterly be yourself. It's great to be sat with someone like you, who has gone 'no, this is me'.

Even though I might look like I've got confidence in myself, I still have issues. I still have internalised homophobia, transphobia, etc. There's another drag queen who did an amazing speech - Panti Bliss’ speech, the Noble Call at the Abbey Theatre in Dublin. In it they basically said in a world that's so heteronormative and basically homophobic and transphobic, even us queer people are homophobic and transphobic. And we can't not be.

So, I still have my internalised issues, but I'm really comfortable being myself to a certain degree. But there will be days I still won't feel comfortable with myself and my gender identity. I still have gender dysphoria. But it's important for people to know that you are comfortable, even if you aren't being as much of your authentic self as possible.

It can be really difficult, but walking down Broad Street in full drag, not caring what people think, is an incredible and amazing feeling. To feel free of all those structures that keep you down.

You came in drag today and quite frankly we're a little jealous – you look amazing. Is there a way to get involved?

Absolutely. The idea that it's a gay men-only scene or that only certain people can do is wrong. Everybody can do drag. We have drag kings, we have people who are female or female at birth - it's a diverse scene that's for everybody.

For me, drag is a performance of gender. So, as someone who is non-binary or a little bit agender, I don't believe in traditional gender. I'll put on my make-up and outfit with lots of contrasting ideas. I keep my beard, so I'm quite non-conforming with my drag. I don't see myself cross-dressing as a woman - I am dressing certain aspects of gender.

With drag, everybody can perform gender in totally different ways than they normally would - even if it is the gender you identify with.

How did you get into the drag community?

I've always dressed up and I've always liked to play with gender. When I used to work in retail, I always liked to dress up. I'd always be the person who'd dress up at Christmas or Easter. And it was always so much fun. I love the fact you become a new person. But I got into drag during the first COVID lockdown. I was bored and thought 'well, what am I going to do?'.

I bought some cheap make-up off eBay and just played around. The more I did it, the more I enjoyed it. Then I got lucky with my online drag family. Now I've started to bring it into my work, so I do talks in drag. I'm writing LGBTQ+ poetry around my research and performing that in drag. I'm liking the fact I can bring both sides of me together.

What message would you give someone who's maybe listening to this and thinks 'I might be non-binary, queer, bi or whatever label fits' them? How can they go about contacting other people from the LGBTQ+ community?

When I came out, there wasn't much support. But now there are so many amazing helplines. You've got Switchboard LGBT. It's a fantastic charity - you can always call them. Pretty much every city has an LGBTQ+ charity. Here in Birmingham, you've got Birmingham LGBT. I used to live in Worcester and there you have Out2gether. Stonewall is another good one on a national level. There are loads of different organisations that are genuinely fantastic. They're very confidential and discreet.

If you're a younger person and you think you might be trans, you've got the Mermaids charity. You can find lots of support networks and charities in your area by using Google too. So, I'd just say reach out.

How can we keep up to date with you what you’re doing, Phil?

Follow my Instagram, I’m @Philli_Mi_Up. We’re going to be doing some exciting touring around the country. You’ll see all my updates there.