Inspirational Arden: How Andreas found a love for Psychology 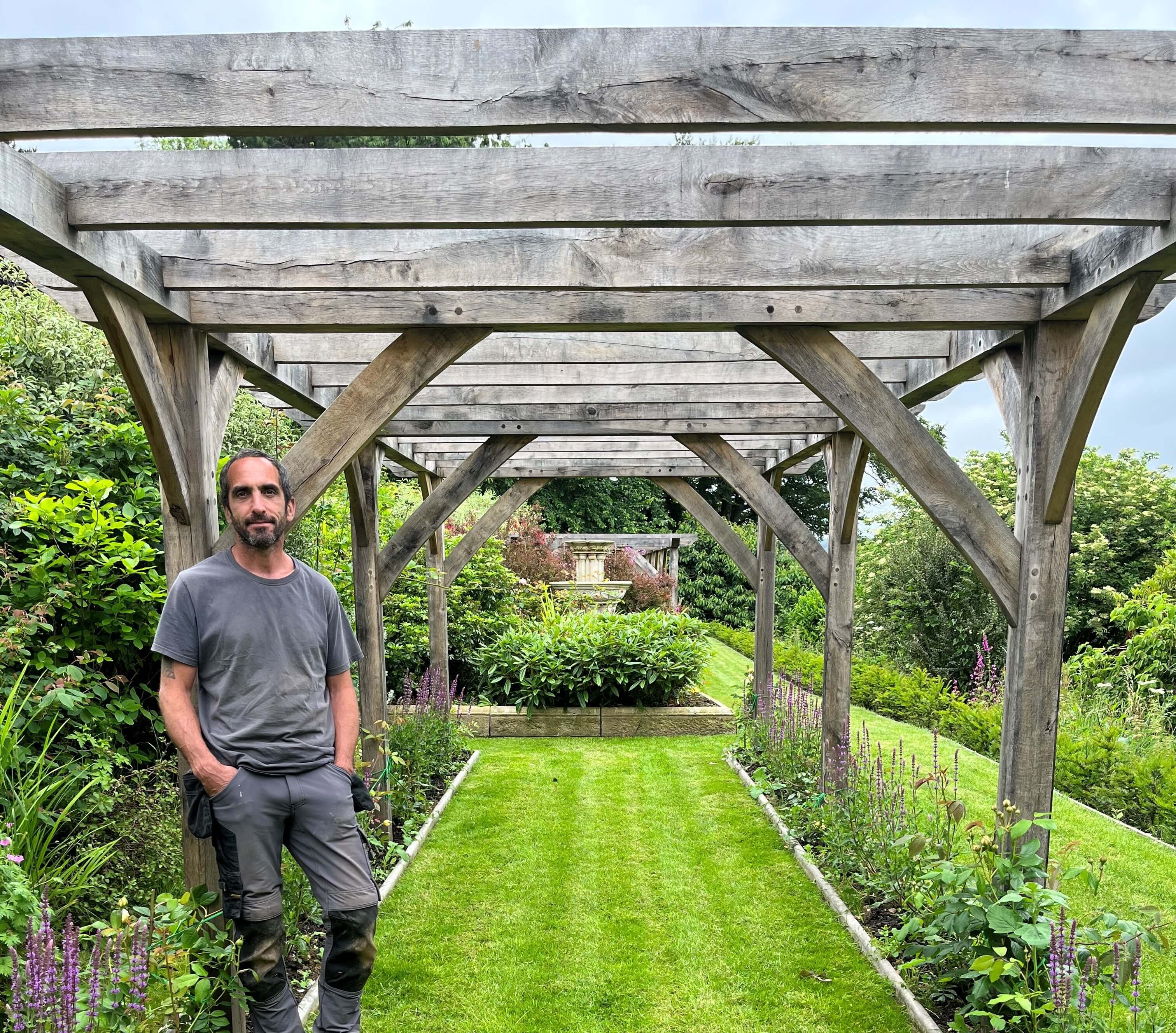 Having finished studying with Arden University, Andreas is just about to start his first job in a new industry.

Throughout our hour-long chat, one thing that becomes obvious about Andreas, an immediately likeable bundle of positive energy, is that he is absolutely besotted. It’s not an orthodox love story though, instead Andreas has very clearly, very visibly, fallen head-over-heels for Psychology.

When he talks about the subject – being introduced to it, spending time with it, his plans for the future – it’s like hearing a friend describe how they’ve finally “Met the one”. And as Andreas tells his story you can tell he is absolutely brimming with excitement to get started in his new role.

Having worked in construction for much of his adult-life, Andreas came to Psychology later than he’d have liked, but he has clearly wasted no time in getting stuck into it.

Racing through the beats of his life, Andreas explains how he grew up in London. ‘I didn't come from an academic family,’ he says. ‘We were really working class. My father was Greek and he's quite strict. For him, it was “You’ve got to be a builder” and that's what it was.’ He talks more about his upbringing (revealing time spent in refugee camps with his father’s family), about working with military helicopters in Northern Ireland, and a brief stint as a Chef, before settling, to an extent, in the construction/ engineering industry.

Across his time there, Andreas was mainly self-employed, finding himself working up-and-down the country. He found himself taking on high-profile jobs and employing lots of people in the process. The work was intense, and there were occasions, Andreas reveals, where he found himself creaking at the seams a bit.

‘I got to a point where just everything I was seeing in the world, and everything around me, seemed a bit crazy.’

A change of scenery became necessary for his mental wellbeing. And so, with family on his mother’s side coming from Cornwall, on New Year’s Day nearly twenty years ago, he loaded up a van, left London and moved to Truro, staying with a relative at first. 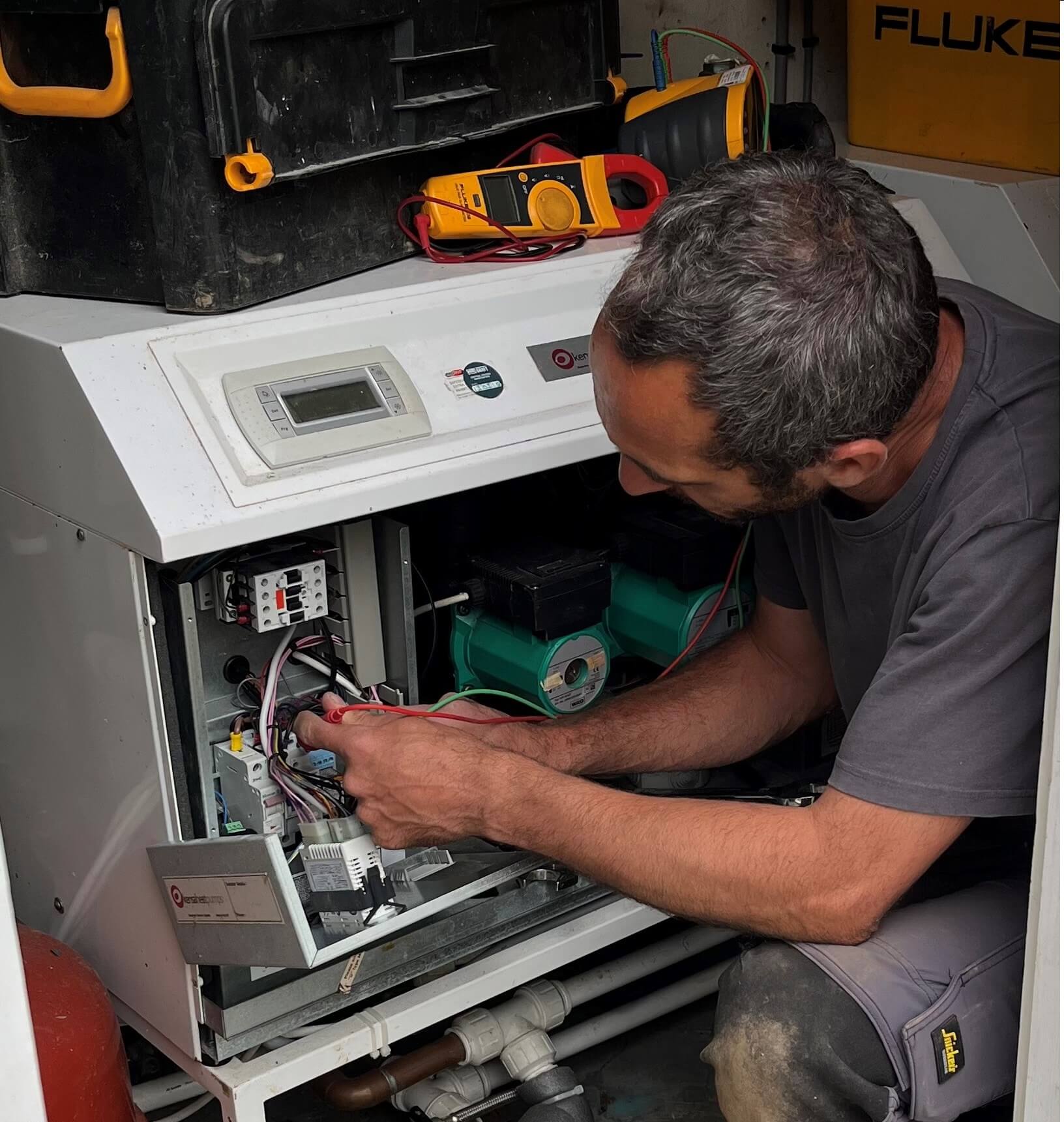 Andreas continued to work in construction around the county, where he says a good reputation and word of mouth is crucial to success. It’s during his time here, however, that he fell into psychology, almost by accident.

‘I was with my daughter and we went to this parents’ thing for the kids. I started looking at a few things, and it just fell into place,’ he says. ‘Then, I just picked up a bit of information in the bookshop, a bit in the media, and I think I might have listened to a podcast, which I don’t normally do, and I was asking myself questions.’

This brief encounter with the subject seemingly kickstarted a new perspective towards his entire life. Adding an element of empirical, scientific rigour to philosophical musings about his situation, he began to find himself understanding more and more about himself.

‘From my parents’ divorce, to military situations, to girlfriends and marriage and divorce, to refugee care, and everything in life, I found there's a lot of kindness missing, and a lot of selfishness creeping into people's behaviour.’

Having gotten the ball rolling with consuming what must be close to every bit of media that has ever even mentioned the word Psychology, Andreas was keen to turn this passionate hobby into a measurable qualification.

Shifting from building materials to the intricate inner workings of a brain might seem like it requires a radically different skill set, but Andreas sees similarities in his approach to them.

‘Fault finding is a huge part of my work,’ he says. That much is evident. Before our interview, Andreas sends over a range of pictures of himself from previous jobs where he appears to be investigating tightly wound tangles of multi-coloured wires with the precision of a bomb-disposal expert. ‘For psychology I liken it to understanding the physiology of the body and brain in particular.’

A single parent, Andreas has also been responsible for raising two adult children. He speaks proudly and at length about both of his children, a son who is hoping to join the marines, and a daughter who is also just about to start her own Psychology journey by taking on a BSc, also at Arden, having been inspired by Andreas’ own experience.

Having fallen into a deep love-affair with Psychology, Andreas was keen to take the next steps, but without distance-learning, the logistics of living in Cornwall might have caused a problem.

‘Living in Cornwall, the nearest university is a roundtrip to Plymouth. I can't afford to do the 120-mile roundtrip, plus I've got kids and a dog and at home. It is a bit frustrating and I was beginning to think I might have to move from the county. There aren't that many jobs in Cornwall in certain areas either. Historically, it's farming, Catering and Tourism.’

However, making use of his previous experiences, Andreas examined his options when it came to finding a distance learning program which allowed him to combine his work and responsibilities with studying at a pace which suited his lifestyle. This led him to enrol on one of Arden’s conversion courses, meaning he would start studying Psychology at a Postgraduate level.

‘I had an undergraduate degree in construction management, or the equivalent, so that allowed me to get onto the Master's course, but I didn't really know what I'm getting myself into.’

What he was getting himself into turned out to be quite a lot of academic success. Despite starting at a postgraduate level, Andreas found his passion for the subject meant he was securing outstanding grades.

The other thing which he points out helped him throughout his studies is his love for reading. When it comes to the Psychology Andreas is obsessive. As we talk on zoom he is flanked by piles and piles of Psychology books. Even in the immediate aftermath of his studies, a time when many students are contemplating casting textbooks into ceremonial fires, Andreas reveals he has continued to devour Psychology texts with the same intensity as ever.

‘I still read every day. I buy too many books like a bad habit because I don't want to forget that want to read.’ 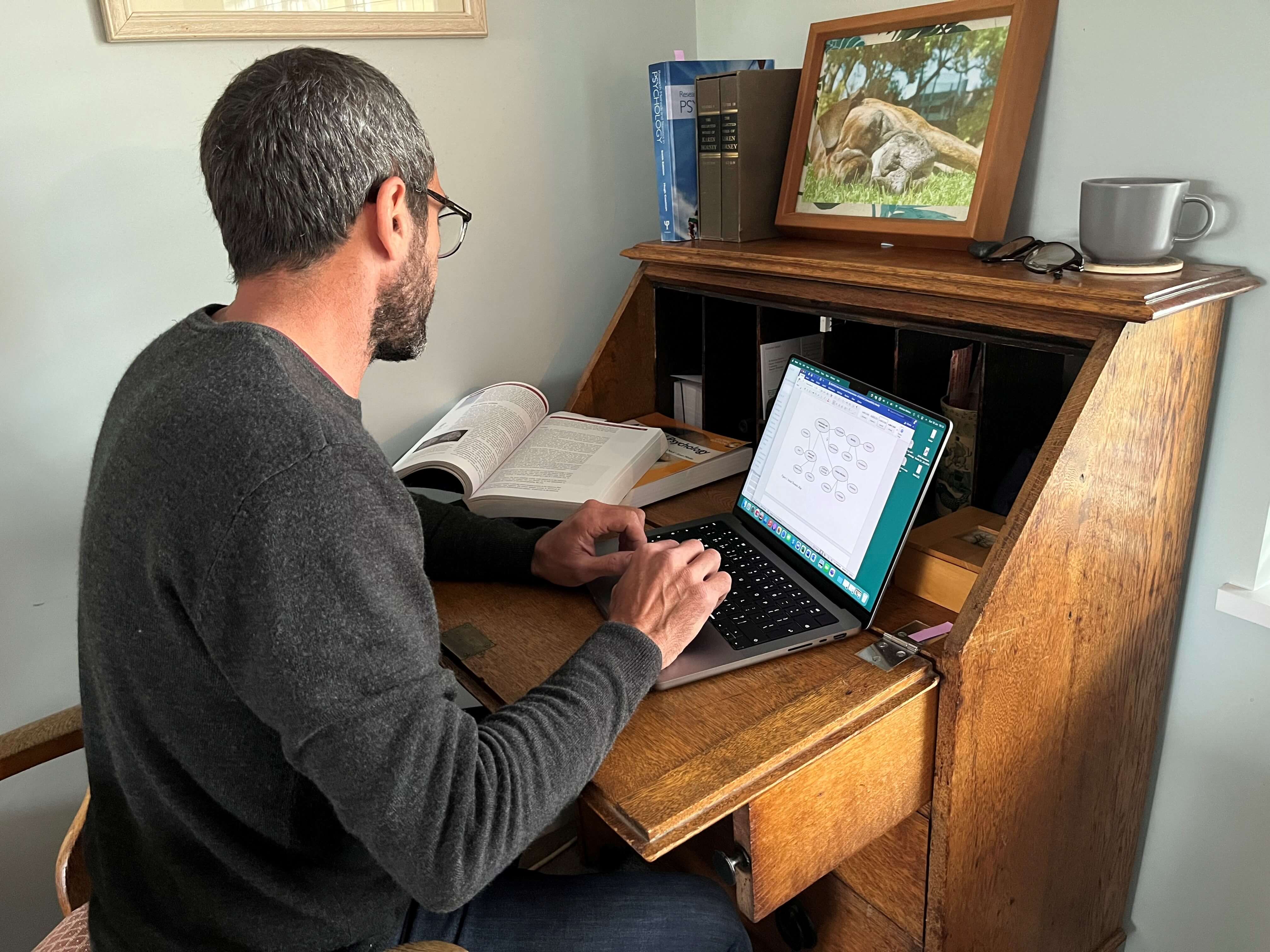 Read more of our student stories

Despite finding this passion almost by accident, it’s clear Andreas has thrived in the academic environment. He is particularly proud of his dissertation – which examined which examined visual spatial attention and whether right/left handedness dominates your visual focus – where he spent months building experiments and reflecting and writing about the results.

Reflecting on his time at Arden, Andreas is full of praise. ‘I absolutely loved Arden. I loved it to bits. For me, the distance learning has certainly been perfect with me having been in Cornwall, as well as the communication and environment.’

‘What I've heard from my daughter, with other unis, is that quite often you turn that up and it's just a lecture, and there's only so many days a week, and then when you try and communicate something they're not as set up for online communication.’

Having finished his studies, Andreas was also lucky enough to almost immediately find a job posting he liked the look of.

‘An Assistant Psychologist job came up via LinkedIn, it was the first one in like a year. I didn't have all the requirements in terms of experience, but I had over-and-above the qualifications. So, I found them and said “Is it worth me applying?” And the lady I spoke to said yeah she said she’d done this conversion course masters about 10 years ago.’

‘So I did my first CV for my first job interview in 30 years, and I got shortlisted. So, now I was thinking now I really want this.’

With opportunities somewhat scarce in his new field which didn’t require him to leave the county, Andreas was understandably a bit nervous ahead of his interview.

However, making use of his in-depth knowledge of his field alongside a wealth of life-experiences, he clearly impressed the panel.

‘I had the interview and it went well but, in hindsight, you always think you should have said something else or something better. A couple of weeks later though, they phoned me and said “Yeah, you got it.” It didn't sink in properly for a week or two.’

‘The idea of working set hours was very different for me having been self-employed for two years. But obviously, I was really pleased. Because it was a national advert, and you get a lot of people wanting to come to Cornwall from other parts of the countries who apply for that. And they said no, we love the way you come across we love we said we think got a lot of transferable skills.’

For now, Andreas is keen to get started in his new role and we talk about how it’s going to compare to what he does now: fewer days worked per week, a shorter commute, putting this new qualification to good use. ‘It's just falling into place, it seems perfect,’ he says. 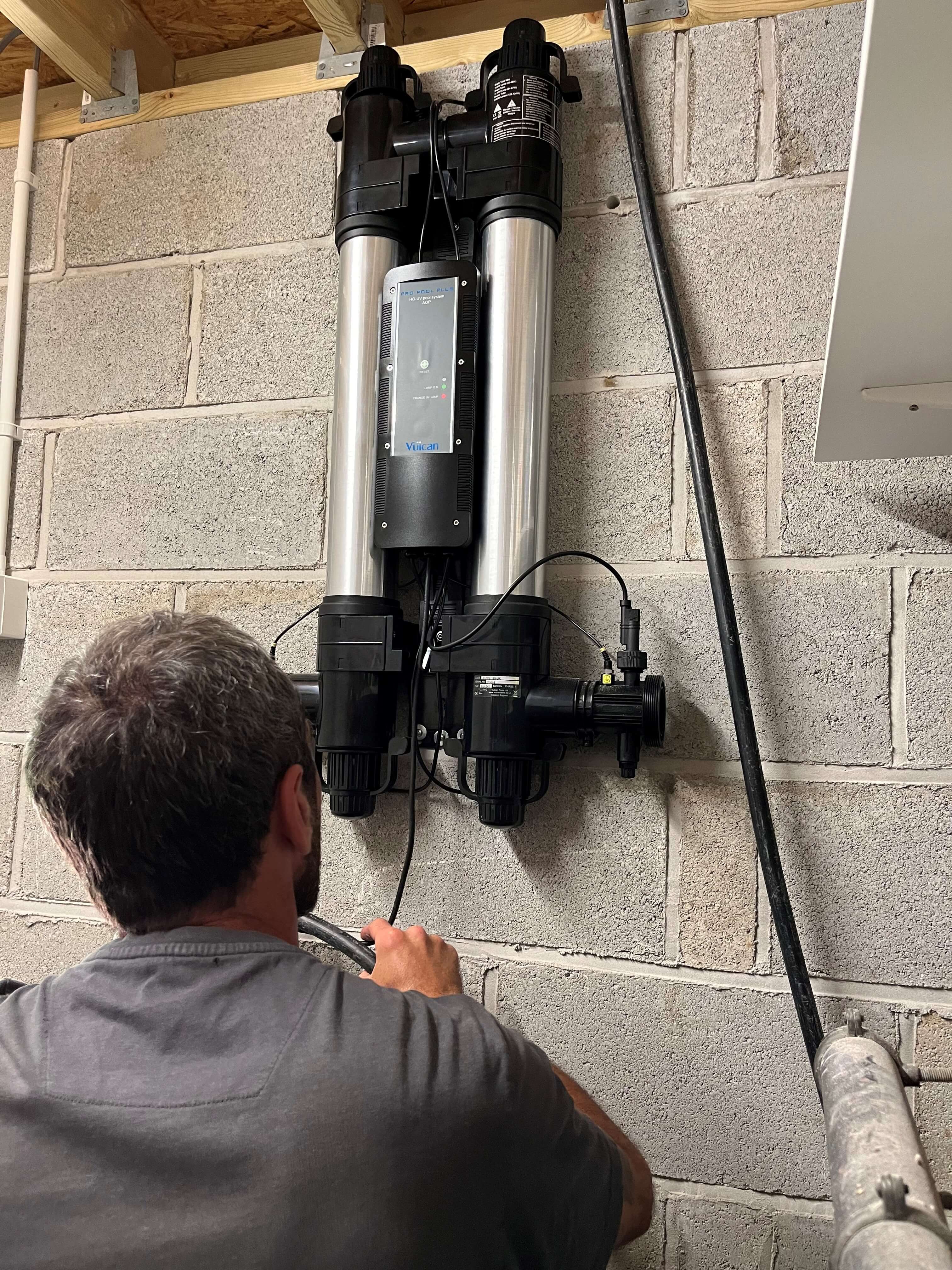 As we speak, he’s not quite 100% sure what to expect when he starts in the job, but he is excited to begin his training. The hospital he’s involved with look a lot at pain and health psychology, he explains, so he’s expecting to be involved in that and looking forward to seeing how some of his theories stack up in practice.

He also wants to carry on studying, whether that involves getting another Masters, or seeking funding for a Doctorate.
We finish by asking him some advice for others. Andreas has obviously found his passion, love-at-first-sight, at that Psychology open-evening at his daughter’s school, but how can others be sure that pursuing their dream will pay off for them?

‘If it's something you're still thinking about months after being interested in it, and it's not just blown over, and if you can potentially do it without subjecting others to a miserable life, then have a go. I was reading about psychology for more than six months and I wasn't fed up with it. I just wanted more and more. And be kind, because it umbrellas everything and it's all you generally need. I think if you're going to do something like this, just be kind to yourself and be kind to others.’

By way of an update, Andreas let us know, before posting this, how much he was loving the new job. He reveals he's conducting regular one-to-one clinics and is full of praise for his supportive team.

'I couldn't be happier,' he says over email.

It seems for Andreas then, that he can rest easy in the knowledge that Psychology loves him back.

To find out how a degree from Arden University could help you achieve what you were born to do, visit our course pages today