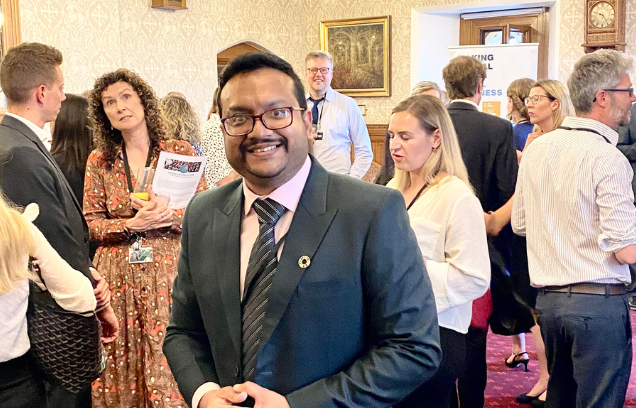 Dr. Syed Ali Tarek, Arden University’s Deputy Head of School of Leadership and Management, was this week invited to the House of Lords to join an All Party Parliamentary Group summer reception event for the United Nations Global Goals for Sustainable Development.

This special event brought together parliamentarians, NGOs, academics, businesses, and domestic actors to reflect on the UK's progress on the Goals since its last Voluntary National Review of the SDGs in 2019. The event provided attendees with an opportunity to look ahead and discuss what more the UK can do to champion and implement this transformative agenda in the UK and worldwide.

Speakers at the event highlighted the crucial role of small businesses, all organisations, and government departments to embrace the SDGs, and called for more to be done as we grapple with multiple intersecting crises – resonating with the Arden University academic's findings. Syed's team reported the UK government had scored only one green and seven amber ratings in SDG 9, indicating some progress is made, but still, it's a long journey. Out of 12 criteria in SDG16, only two were green, seven amber, one red, one blue and one grey rating indicating the government is struggling to keep track of the expected progress on SDG16.

Syed has been working on SDGs since 2012 and has participated in various High-Level UN Political forums in Geneva, Bonn, Bangladesh and UK. He expressed his concerns in the forum that, even though the UK was actively involved in SDGs formulation, it hasn't quite lived through its promises. Syed believes academia is vital in bringing 'sustainability' to the core of delivery to improve awareness and has called for higher education institutes to contextualise SDGs in real-world scenarios and to bring learning out of doors when it is explicitly rooted in pressing human and environmental narratives.