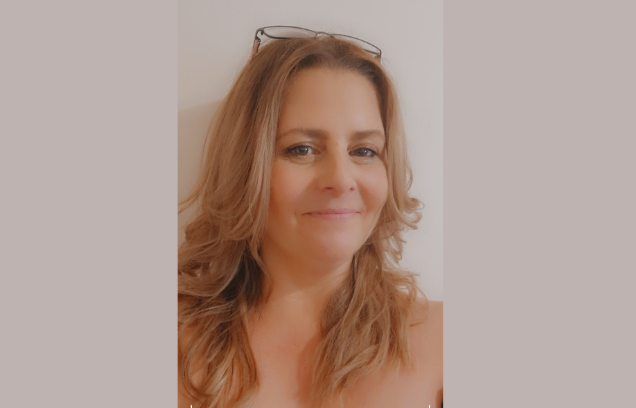 Alongside her studies Laura is also a single mum and, due to a neurological condition, has had 14 brain surgeries. You can read more about Laura's story below, how she has overcome numerous challenges and biases, what keeps her motivated, and how studying with Arden has changed her perspective.

As part of International Women's Day 2022, Laura will also be participating in a webinar, along with Caroline Pike, Arden University's Inclusion Services manager, on Wednesday 9th March at 12:30.

Make sure to join her and Caroline as they discuss the support services available at Arden University, how the support you may need is available, and that anybody can achieve their dreams through academic study.

Hi Laura, tell us a bit about your story?

I've had a neurological condition all my life, which wasn't actually diagnosed until about 13 years ago. I was a terrible student as a child. I mean I could study; I just didn’t want to. I think that's why there's so many adult learners now, it’s always a struggle with teenagers trying to get them to understand the importance.  Since then, I've always done some form of studying, but once I started becoming quite poorly it was more difficult to get the support I needed.

What challenges have you overcome?

I've had 14 brain surgeries now. When I had my first one, it was quite a big kick in the stomach and it took a very long time for recovery. It was pretty much the symptoms of a stroke that I suffered and it took me a good couple of years where I’d go every week into physiotherapy. That's quite a difficult situation to be in, especially when you're in your 30s. I felt sorry for myself for a little while, which is perfectly understandable, everyone's entitled to that, but then I kind of got out of it. I thought “You know what, I can't live like this and I'm not going to do it.” That's where my stubbornness kind of came into effect. I picked myself up to carry on studying, but it was more difficult obviously. I became quite unwell again for a second time and, where I was studying at the time, the support wasn't really there. So I stopped studying for quite a few years. Kind of concentrated on myself and my health and tried to get back up to top notch. And then I had my daughter. Obviously, as an older, single mother, and as somebody with a brain that isn't quite as functional as other people’s it has been a very big struggle.

You know, there are obstacles that every student has to overcome. Mine might be a little bit different, but that's all it is. It's just an obstacle, and I've got over it. I think my stubbornness helps –  I refuse to sit back and allow things to be decided for me. I've made this choice now and I'm here now until the end. And even then, after that, I will probably end up and do my Masters. And you know, I’m not ever going to stop to be honest. It's become a bit of a habit now. Some people smoke. I seem to just study.

What led you to study with Arden?

I came across Arden on Facebook, and I thought you know what, I'm going to do it now. I'm very much a jump first, think later sort of person in everything I do, rightly or wrongly. It's not going to change now. In actual fact, from the very first phone call I ever had with Arden I was, quite honestly, shocked at how much help was offered, even at the very beginning, even with the simplest of things like filling out forms. While I can fill out a form now, there was a time when I couldn't – what my brain wanted and what my arms would do would be totally different – but it never even occurred to me that I'd have that kind of support. It was only when I started talking to them that I kind of realised, actually, this support is massive, down to software that can help me.

What are you studying with us, and what was it what was it that led you to wanting to study that?

I’m studying Criminology and Psychology dual honours. We've got a very uniform driven family. So whether it's police, fire fighters, the army, of RAF, there's always uniform in the family and the police is always something I'd love to do. I’m not able to actively be an officer, and I get that, that's just the way it is. But I knew I wanted to do something involved in the police. So, I thought, right, time to delve into this a little bit more. That's when I investigated a bit more, and found out about the probation service. My main aim is to join the probation service as a probation officer. However, the more I'm at Arden, and the more I study, the more I learn with Arden, seeing what the lecturers do, I think shall I go the teaching route?

The theme of this year’s International Women's Day is #breakthebias. What sort of biases have you encountered, and how have you dealt with them?

Well there's lots, not just in having a long term chronic illness, but to be a single mum too is so difficult. Sometimes, you don't have that support network. At home in that household. You know, if my six-year-old daughter decides that she wants to have a meltdown over yoghurt, that happens regardless of whether I'm studying or not.

I did have a lot of comments in the beginning like ‘How are you going to manage?” and there were lots of negative suggestions thrown my way. There weren’t very many people that were like “Wow, that's amazing, do it.” Whereas I'm very much that sort of person. If somebody says to you can't do something, absolutely do it and show the people who said you couldn't that you can. What that does for your self-esteem is incredible.

I understand people are worried and they kind of see it in a very logical way. However, when you're a single mom, and you're sat at home, with your children, you want to better yourself, you want to do more, and you want them to see you succeed.

My little girl is fantastic. I sometimes have seizures with the condition that I have and she is the calmest person in the world, I suppose because she's seen it from the start, she knows how to deal with it, and she’ll say to me, “Mommy, why do you still go to school?” And I'm like “Well, you know, mommy wasn't very good as a little girl and she didn't study as hard as she should. And now mommy's doing it.” And I’ve said to her that I'm doing this, not just for her, but for me, too. And that I want to better our lives. By being better educated about things that I know more that I learned more. Sometimes you wish that you could talk to some of the adults that were negative to you in that way. It's not about taking on more than you can chew and it’s not just about making more money, for me it’s about the self-esteem that has been worth its weight in gold.

I may struggle, I may have bad days, but it's that feeling of accomplishment. That what I want. I want that feeling that I don't have to just sit at home, as it were, and do housework and run around picking up toys off the full day. I can do more. And I do do more. And I'll probably continue doing more for as long as I can.

Obviously being a being a single mum is a huge task. How do you find the time to fit in your studies?

You just have to be very knowledgeable about what's happening that week. At weekends, I prepare for the following week because my daughter might need to go to the opticians or I might have a dentist appointment etc. It's just coming up with a system that works for you. And for me, my system is writing study schedule every weekend, for the following week. And I find that way mentally better for me as well because I'm not stressing about four weeks time, because that's in four weeks time. Instead, I'm focusing on what is immediately coming.

In my first month at Arden, I was a mess and I wasn't very productive. I got it all wrong. But that’s ok, it's just a case of finding a way that suits you. Now that I have my feet very firmly under the table, I have a great system that suits me though.

What do you think Arden offers that other universities might not?

For me personally, I feel that the support network as a whole is exceptional. Not just one particular part of Arden either. It's not just the students, and it's not just student support, it's everything, all combined. Everyone is on the same page, you know. The inclusion portal now is fabulous, I love it, you know, got really excited when I saw that.

I was in hospital, and I was doing the degree and I’m going to feel like such a sense of accomplishment that nothing else is going to compare to. I've been sat in a hospital bed, with my laptop, with my work everywhere, literally waiting to be called out for surgery. And the doctors and nurses have looked at me like I'm absolutely bonkers. I never thought I'd ever say I enjoy studying but I actually do, I really enjoy it and it's made my life better. It’s made my perspective different. I think as long as you're willing to put that effort in on your side, then Arden obviously will put in effort from their side too.

What do you hope people will takeaway from your webinar this week?

I hope that people, and women in particular, will see that, whether you're a single mom, whether you're disabled, or whether you're both, whatever challenges you have in your life, I would like people to realise that they are just that – they are challenges. It doesn't mean that they're set in stone. 13 years ago, I never ever would have thought, after having so many brain operations in such a short amount of time, that I would have been able to get to this point, and I am now. Now I know, at some point, I’ll be sitting here with my degree. And that is such a good feeling.

That is such a good thing and because it doesn't matter now, to me, how many more operations I need to have in the future, because it's not going to stop me. And that in itself is teaching my daughter that it doesn't matter what happens in life. If she wants something, and she wants to work for it, she can get it. And that to me is worth its weight in gold. As long as she sees that from me. I'm happy. I've accomplished everything then.

To see how a degree from Arden University could change your life visit Arden.ac.uk