If too much staring at a screen makes your eyes go square then Arden University Lecturer Kieron Oakland’s pupils must be pretty rectangular after he completed a 24-hour charity gaming session in support of Mind.

With Arden’s nominated charity for 2021 being Mind – an organisation focused on improving mental health – Kieron’s gruelling stream was part of their initiative ‘Switch off – game on’, encouraging individuals to raise funds and much needed awareness via videogames. 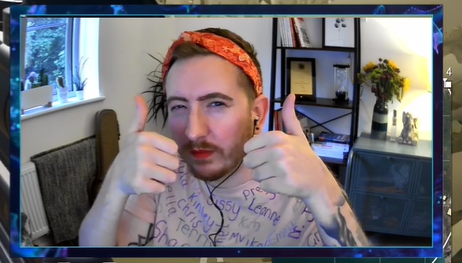 “I’m really interested in the holistic perspective of gaming. Gaming has saved my life, helping me at my lowest ebb, but it’s also held me there. It’s harmed as well as helped me. Gaming is a fascinating way of understanding the breadth of human experience, especially now when you have kids plugged in from day one. It’s important we work to understand how to amplify the good and remove the bad,” said Kieron.

Between 11am Wednesday 07/07/21 to 11am Thursday 08/08/21, Kieron, joined on screen by a number of other Arden University lecturers, worked his way through a variety of games included World of Warcraft, Rocket League, Apex Legends, PUBG, and Fornite.

And if you’ve ever wondered what a collection of Psychology lecturers playing Rocket League at 1.30am in the morning looks like, you can check it out at Twitch.tv/koakland7

In game kills and deaths resulted in additional donations but, as well as the gaming, Kieron also took part in a bunch of additional challenges on screen. There was even a spoken word performance of S-Club 7.

There was also plenty of time given dedicated to raising awareness of the deeper impact of videogaming, including a period on screen where Kieron chatted to Matthew Copeman, who is doing a PHD on the subject.

Kieron admits pulling an all-nighter (something he hasn’t done since his student days) was tough, but the amount of people who joined him in watching, playing, and donating carried him through.

“There were a couple of periods in the evening where I struggled when I perhaps hadn’t eaten or drank enough, but what really caught me off guard was the engagement we had throughout with people coming onto the stream. I thought it would be quite an isolating experience, but there was constant engagement!”

Kieron’s efforts have raised a fantastic total of £1290 for Mind so far.

“When it became clear we’d smashed the goal it was incredible. It was very humbling, it felt like I was in the middle of a warm cuddle,” he said.

He also offered some words of wisdom for anyone else thinking about picking up a controller for 24-hours, for charity or otherwise.

“Have a plan, have a back-up plan, and as my grandad said, keep talking.”

To donate via the justgiving page, please visit: https://www.justgiving.com/fundraising/arden-university

Alternatively, there is a link to donate through Kieron’s stream at twitch.tv/koakland7 by clicking the purple ‘justgiving’ logo on the ‘About’ page.